In my 20 plus years in well drilling, I was involved in some pretty amazing projects. Such as being involved with drilling a 42 inch, 202 foot mine ventilation shaft hole that finished off 5 feet into solid bedrock in Northern Quebec. Or working several months while drilling monitoring wells at the now closed Keele Valley Landfill, which is located on the edge of Toronto. When it was operating, this massive landfill was the largest in Canada, and the third largest in North America.  And there were also some drilling contracts our company bid on, but did not win. One was the site of the now present CN tower. The tender required several holes to be drilled 100 feet into solid bedrock. These would be used as reinforcing anchors for a massive 22 foot deep concrete and steel foundation which contained 7,046 cubic metres (9,200 cubic yards) of concrete, 453.5 metric tonnes (500 tons) of reinforcing steel and 36.28 metric tonnes (40 tons) of thick, tensioning cables. 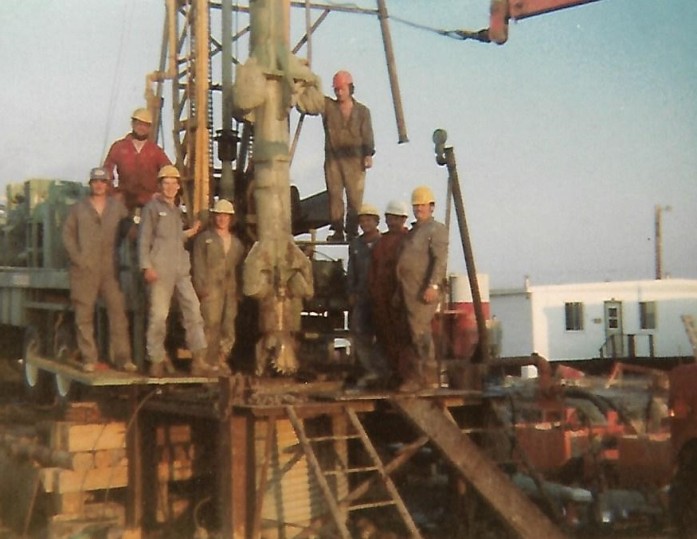 Back in my drilling days in Northern Quebec. I’m the tall, thin guy in front left centre. The drill bits for a 42 inch hole that would end up going 5 feet into solid bedrock at 202 feet. It needed to finish in solid rock to avoid anything collapsing.

When a person visits the CN tower, he or she does not see what is below the surface. But they have the faith and the confidence to take the elevator up, because they have the confidence in the engineers who have designed the tower. Crews dug down, before they built up. The CN Tower was built to withstand an earthquake of 8.5 on the Richter scale. The upper reaches of the CN Tower were built to withstand winds up to 418 kph (260 mph). The tower is said to sway over a metre at the top during high winds. Believe it or not you would be actually safer in the CN Tower in a hurricane or earthquake than in a typical home. Only structures such as the CN Tower that are anchored on solid bedrock are secure enough to withstand dynamic forces in nature and remain strong.

Image Source @2013 Doug Summer and George Rumble. Such a massive foundation project for the CN Tower.

Building our spiritual life is much similiar to building a massive tower such as the CN Tower. In Matthew 7:24 Jesus states, “Therefore everyone who hears these words of mine and puts them into practice is like a wise man who built his house on the rock”. Unless we have a foundation anchored on Jesus Christ, the Solid Rock, we are likely to fall apart when life challenges us with unexpected events and everyday pressures. 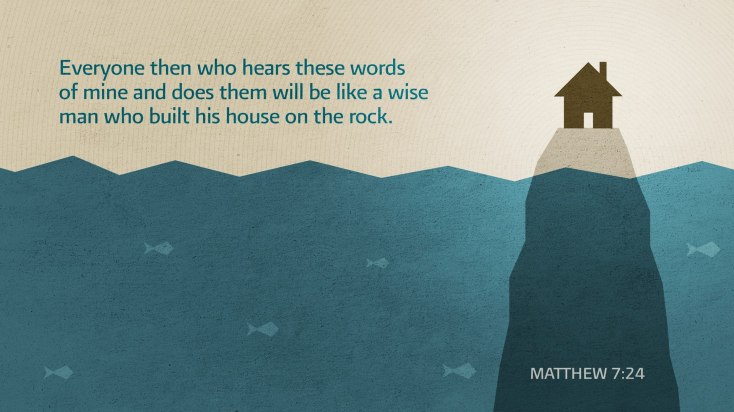 Because rock is strong, it can serve as a place of shelter. The Bible contains a number of stories of people hiding in a cave or rock when they were pursued by people or wild animals. As a young man, David hid from his enemies in a cave. 2 Samuel 22:2-3 reads, “The Lord is my rock and my fortress and my deliverer; the God of my rock; in whom will I trust”. What a comfort this is as we isolate ourselves with the current Covid-19 pandemic. We put our trust in God, who is our rock!

Rock is also used as monuments. Cemeteries contain tombstones that help us remember and commemorate people who have departed from this world. Statutes are erected for famous people or heroes. Cenotaphs are monuments honouring someone buried elsewhere, especially those commemorating people who died in a war. Monuments, statues and tombstones are made of rock, because we want them to last. God wrote the 10 commandments on stone slabs so his words would be a constant reminder for His people. And in the New Testament, Jesus renamed the disciple Simon, calling him Peter, or Petra, which means rock. In Matthew 16:18, Jesus said, “You are Peter, and on this rock I will build my church.”

In the area of Hillsdale where our church is located there are a couple of quarries within 50 kilometers away. Quarries are places where rock is cut from the ground. It can be crushed to use as a solid base for roadways. Or it can be used in the making of buildings. Many times older buildings such as old churches have a cornerstone, a strong block of stone on the edge of the foundation. On our church this cornerstone is supporting tons of brick and mortar above it. In Ephesians 2:20 the Bible refers to Jesus as the chief cornerstone. Only He can provide a stable foundation for our lives. We build on this firm support by reading the Bible, memorizing scripture, praying and connecting with other believers. If we skip these construction steps, our spiritual house is weaker.

Standing on the foundation of Jesus Christ does not mean we are not going to have any problems. But we can face anything that happens with confidence because we are anchored on a solid rock foundation. As Psalm 40:2 says, “God set my feet on a rock”.

The 2021 Revised Salomon Summit 700. It Became the Challenge I Was After.

It was Friday September 24th, and the day before my Salomon Summit 700 trail race at Blue Mountain, Canada. The strangest words spilled out of my mouth as I shared with my wife. “I have no desire to run this”. Though I ran some relay sections for the Monarch Ultra in the fall of 2019, […]