These past few years people have been becoming more aware of what we eat and drink.  Through public criticism and advocacy the insecticide Dichlorodiphenyltrichloroethane (or DDT) was banned in 1992 and through consumer concern, better and more detailed is found on our packaged foods.  As we become more and more aware, more changes will take place. 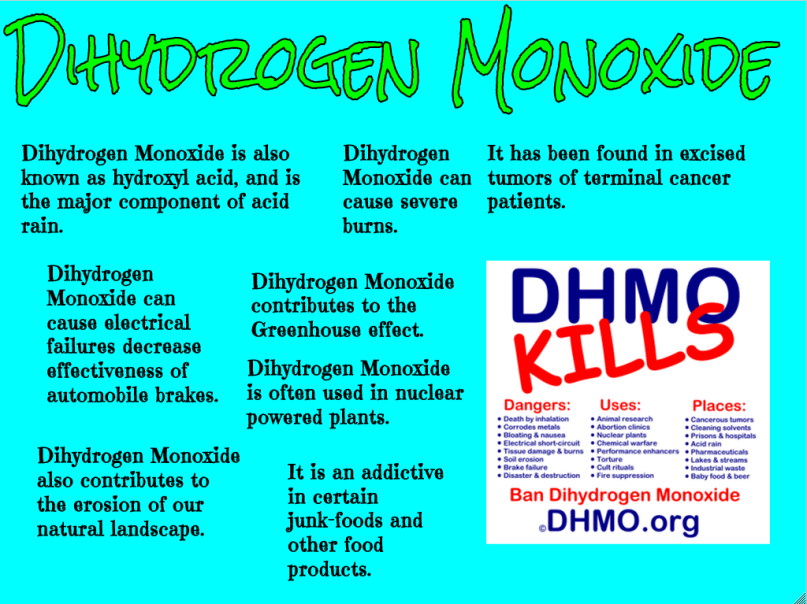 So what if you knew there was a chemical that can cause excessive sweating and vomiting.  It is a major component in acid rain.  It can cause severe burns in its gaseous state. It is a chemical where accidental inhalation can kill you.  It contributes to erosion and decreases the effectiveness of automobile brakes.  This particular chemical has also been found in the tumors of terminal cancer patients. Would you not want it banned? 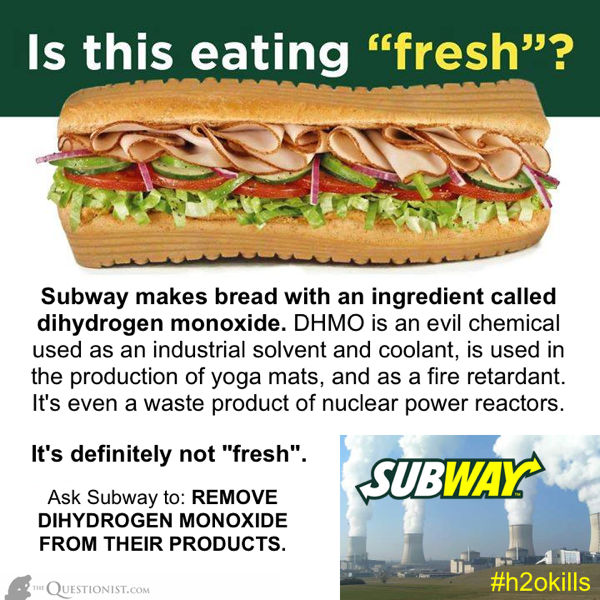 The chemical I am talking about is “Dihydrogen Monoxide” and for the past few years concerned consumers on internet and social media posts have been advocating for stricter control, labelling it as hazardous or demanding a complete ban.  The question is, ” Do we believe everything that is posted on the internet?”

Dihydrogen Monoxide awareness has been around for decades, but it picked up steam way back in the late 1990’s when a young 14 year old student named Nathan Zehner raised the alarm with a scientific survey at a science fair on gullibility.  Zohner’s project was called “How gullible are we?’ He won 1st prize for his efforts as he urged people to sign a petition to support a ban of this particular chemical. Out of 50 people 43 said yes, 6 were undecided and 1 only actually said no. Only one person knew what the chemical Dihydrogen Monoxide (or DHMO) was….WATER….made up of 2 parts hydrogen and 1 part oxygen.  If you were to do research on Snopes you will find that the DHMO scares are a fraud, a hoax, a spoof.  To repeat Dihydrogen Monoxide or DHMO is the unfamiliar chemical name for plain old water, or H2O. 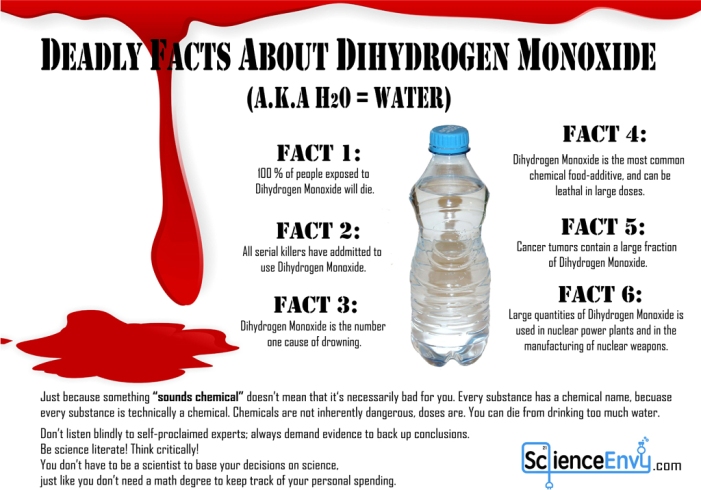 When you know what the chemical actually is, the petition the young boy had was quite silly.  It becomes an irrational fear which comes about by not knowing the complete picture.  But Nathan Zehner did go to prove that people can really be gullible. As a society we are not critical thinkers, and that can also apply into our spiritual life as well.

It reminds me of how some  people might view their concept of God. Instead of reading and studying the Bible and thinking critically of what was read, our information about God might come from other sources.  On the internet there is a lot of information, and a lot of information about God. But it may not be correct. It may turn into an irrational fear of God, just like an irrational fear of water (which is life sustaining). 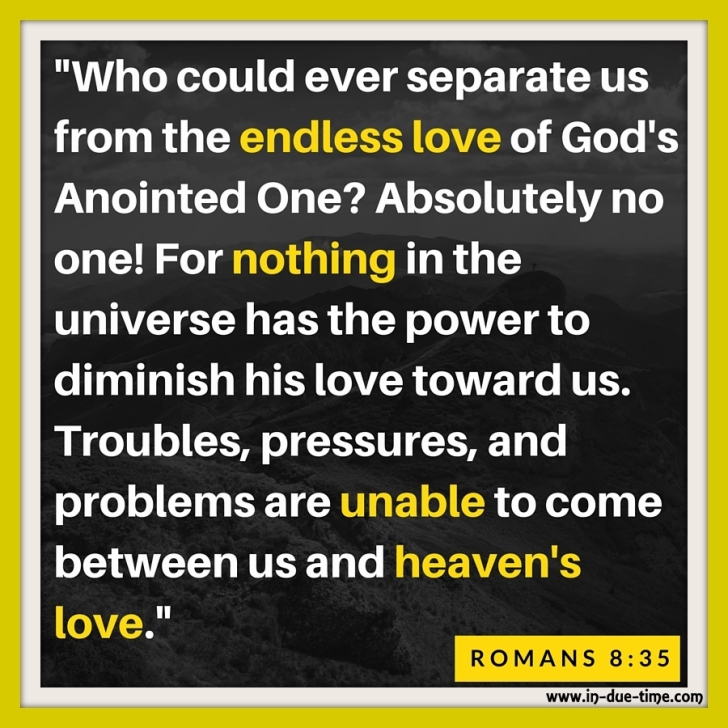 Image Source  Irrational fear of God is like fearing H2O.  In the Bible a writer by the name of Paul is addressing people who have an irrational fear of God.  Romans 8:35 says, “Who could ever separate us from the endless Love of God’s Anointed One?  Absolutely no one!  For nothing in the universe has the power to diminish His love toward us.  Troubles, pressures, and problems are unable to come between us and heaven’s love”.

And in Romans 8:38-39 there are 10 neither and nors.  “For I am convinced that NEITHER death NOR life NEITHER angels NOR demons NEITHER the present NOR the future NOR any powers NEITHER height NOR depth NOR anything else in all creation will be able to separate us from the love of God which is in Christ Jesus our Lord”.

So what is holding us back from God. In the Bible you will find there is nothing to be afraid of.  On the cross Jesus paid the price for our sins so we could have a life of freedom from the bondage of those irrational fears of God. Romans 8:1-2 says “Therefore, there is now no condemnation for those who are in Christ Jesus, because through Christ Jesus the law of the Spirit who gives life has set you free from the law of sin and death”.

9 thoughts on “All For Our Health”

A day to remember the 1.3 million people who lose their lives annually from car crashes.